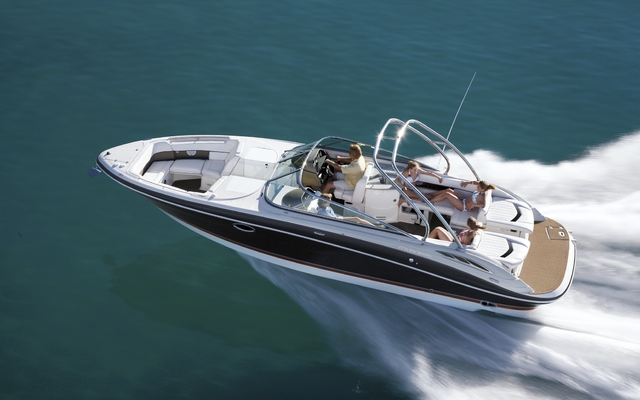 For several years already, open-deck boats have been highly sought-after by first-time boat buyers. They are unequivocally popular. Their smaller size makes them more accessible, thanks to their lower starting price, while their configuration makes them both comfortable and versatile. It’s a great starting point.

Although this type of boat used to be generally smaller in size, for the last few years, builders have been fully exploiting this niche by offering models with increasingly impressive dimensions. The goal is to make them more practical by not only increasing their length, but also by adding more conveniences, the lack of which had been considered a drawback with open-deck boats, also known as bowriders.

Bigger models
This is exactly what Michigan-based Four Winns did by introducing its Horizon 310 model two years ago. With a total length of 31’4” (9.6 m) and a 9’8” (2.8 m) beam, this open-deck boat is a complete departure from what we are used to seeing. In fact, it’s the most impressive of its kind at Four Winns. From the outside, you’d think it was a cuddy boat, mostly because of its low profile. Only up close do you notice the large foredeck that can comfortably bring several extra passengers along for the ride with, naturally, the wind in their hair. A small removable table can turn it all into a small lounge, while the seats also convert into a berth for stretching out and basking in the sun. In short, the bow of the Four Winns H310 is anything but wasted space. In terms of style, the boat is easy on the eyes and you can make it sportier by adding an optional aluminum arch.

More conveniences
What distinguishes this boat from smaller ones is undeniably its conveniences. There’s a small starboard washroom where you can discreetly slip on your swimsuit. It has a portable toilet, a small vanity complete with sink and some very practical storage cabinets. Located portside is a small cabin with a long, narrow bunk. It’s a useful space for taking a little siesta, but don’t plan on sleeping there comfortably during long trips. It can accommodate two adults, but intimacy is a must. This little cabin is packed with attractive options such as a flat-screen TV, a Sony sound system, a microwave and even air-conditioning.

The large swim platform in the stern is very practical, just like the two seats that can convert into sun loungers. Ergonomically-speaking, there’s not much to reproach. The boat’s larger size results in an extremely spacious cockpit that gives you room to move without stepping on people’s toes.  A wet bar with a sink and fridge adds to the functionality. Finally, the seats are very comfortable and almost all can be adjusted to create several recreation areas.

On the water
The Four Winns H310 is offered with two Volvo Penta 5.7 GiC engines, with 300 hp each, coupled with Duoprop drives, as a standard option. Our test model had the most powerful system, two V8 377 MPI Mercruiser engines, with 320 hp each, combined with Bravo III drives. What’s more, our Four Winns boat was equipped with an Axius propulsion system that let us control the boat with a joystick at low speeds and when docking. The availability of this system marks a major innovation for 2011.

At the driving station, we liked the feel of the four-spoke wheel and the driving position. The boat’s low profile allows for excellent visibility, an uncommon trait in a boat this size. The instruments are well laid out and the Smartcraft onboard computer keeps the driver informed of vital data at all times. The DTS (digital throttles and shift) controls are somewhat invasive due to their size, but you quickly get used to them. To keep you from getting too lonely, there’s a double-wide helm seat. We enjoyed its electronic adjustment, a nice touch from Four Winns.

With its relatively light weight and two 320 hp engines, our test model had power to spare. Due to its low profile, we didn’t really feel like we were at the wheel of a 30-foot boat, and tended to slow down around big waves. We were, however, surprised by its performance and sturdy feel as it sliced through waves without a hitch. Its length and width give the Four Winns H310 good stability. Our test model reached a more-than-reasonable top speed of 50 mph (81 km/h), while its ideal cruising speed was 2,700 rpm, allowing us to travel at 23 mph (37 km/h) while using 13.5 gallons (50 litres) of fuel per hour.

In sum, the 2011 Four Winns H310 has all the features you could wish for in an open-deck boat. Its size also makes it easier to adapt to rough bodies of water, while its twin engines gave us added confidence. Its small cabin and washroom enhance its practicality, but naturally it’s nowhere near as comfortable as a cruiser.