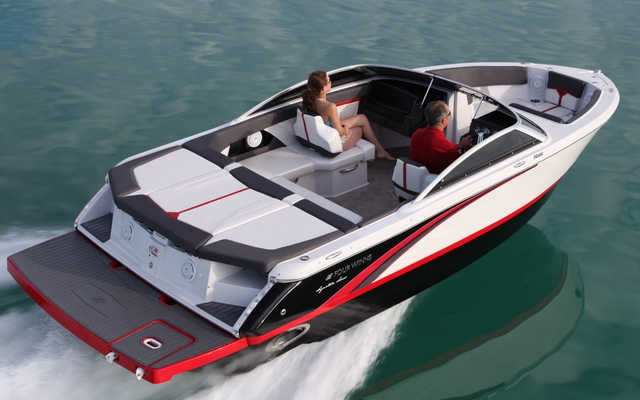 Rec Boat Holdings announced the new 2012 Four Winns product line today to their North American and International dealer and distributor retailers. Audience members from around the world were introduced to four brand new models for the brand as well as many refinements to specific models across the line. Headlining this year’s dealer conference was Four Winns’ achievement in redefining the 20-foot and above recreational segment with the launch of the new H210, H210 SS, S215 and S215 SS models.

“We are aggressively attacking the recreational segment in order to bring a distinctive level of separation between Four Winns and our competitors,” stated Roch Lambert, Group President, Rec Boat Holdings. “This year’s line-up is a direct hit and creates a powerful reason for consumers to choose a Four Winns boat. Our new sport models bring a tremendous amount of value for the investment with more roominess, added features and optional packages designed to offer customization opportunities to fit the buyer’s budget,” Lambert concluded.

The H210 is the first in the series of design and re-engineering efforts which will provide boating enthusiasts with a unique yet fully functional family boat. The most distinguishing characteristic of the H210, and the series, is the design lines pulled in from the big sister cruiser line up, giving each model the look and feel of a much larger and luxurious boat. Cockpit space and low-profile extended swim platform are additional differentiating features with the H210 delivering the interior room of competitive 22-footers and easy board swim platform. Following in the steps of the H210 is the S215, a 21’ 4” boat featuring the same Four Winns exclusive design, curved glass windshield and cabin with more than six feet of sleeping area. In addition to the H210 and S215, Signature Series upgrade packages are available with the H210 SS and S215 SS models. Package features include through-hull exhaust, custom graphics, carbon fiber vinyl enhancements and Sure- Load TM custom matched trailer with aluminum wheels, to name a few.

The new V305, launched at the Ft. Lauderdale boat show last year, was also on display with the new low-profile windshield, appealing to more North American markets. Aggressive pricing on the new V305 for model year 2012 will enable dealers to offer those consumers with a more conservative budget, a cruiser uniquely designed and packed with features for an all-around family cruiser.

Lambert added, “We’ve come off a very successful Glastron dealer meeting last week and based on dealer feedback from our Four Winns meeting so far, we plan to hit the ground running in the 2012 model year with attractive programs, new products and future models in the pipeline.”