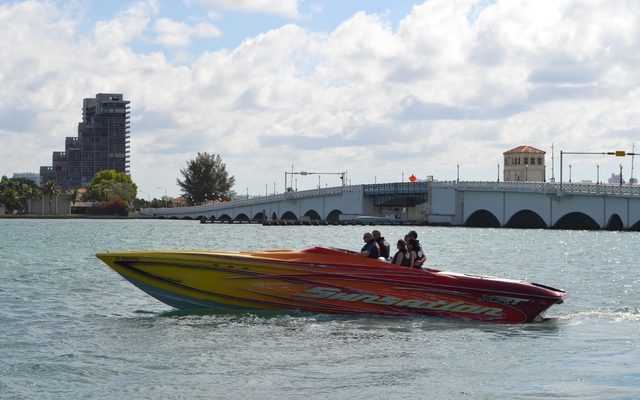 The economic crisis that came to a head in 2007 really did a number on the water craft market – particularly the high-performance boat segment. Consequently, there are still some great deals to be had for used boats, though current owners are having to face serious depreciation in their products’ value. The crisis also brought about a number of bankruptcies, buyouts and restructuring, which in turn also impacted the high performance arena. Even for those of us with experience in the field, it can be hard to know which way is up these days.

Based in Alongac, Michigan, Sunsation has been building high performance boats for 30 years. And though they have faced some tough times, this company seems to have successfully survived the recession. In fact, Sunsation is one of the only high performance boat makers to have added new models to its line-up this year. Not to mention the fact that the company had one of the largest displays in its segment at the recent Miami Boat Show.

Keeping customers loyal
Just over three years ago, Sunsation introduced the F4, a 43-foot model that would become the company’s pride and joy. Yet, the addition of the F4 created a gap between this new 43-foot model and the other at 32 feet. Hence Sunsation decided to present a 36-foot model this year. Not only does it bridge the gap, it will prevent clients who want something big (but not as big and costly as the F4) from turning to the competition.

The Sunsation 36 is offered in the same versions as the brand’s other models: the S, SS, SSR and XRT. While attending the Miami Boat Show, I seized the opportunity to familiarize myself with the 2011 36 XRT. First thing I must admit is that from a visual standpoint, the 36 XRT is oddly attractive. My test model was decked out in bright colours, ensuring that anyone driving it will not go unnoticed. And isn’t that what you want in this kind of boat? The extra inches over the Sunsation 32 also give it a more exotic style. In my view, it looks more proportional, and once you’re aboard, it seems like the nose stretches far into the distance.

Outstanding attention to detail
The rear features a large swim platform that is fully integrated with the boat’s design. A sizeable sunpad offers a nice spot for catching some rays or just chilling out. I also liked that the sunpad is truly flat, not angled. However, a guardrail would have been nice. As it stands, this area should be avoided when the boat is in motion, even when it is going slowly.

On board, the attention to detail is evident. I’ll start with the engine compartment, which is nothing short of sublime. The red theme colour on our test model was omnipresent, from the pair of Mercury Racing 525 engines painted entirely in red to the different fluid reservoirs. Not a detail was missed. Even the mirrors and nuts had red trim! It’s pretty rare for a boat’s most attractive feature to be the engine compartment, but on our test model, this was certainly the case.

The cockpit was relatively spacious. Six adults can ride aboard and move about without too much trouble. Keep in mind, though, that this is a high performance boat, so roominess was not a key design criterion. But we’ve definitely seen worse. The XRT version, our test model, sets itself apart with its fighter-plane-inspired dashboard. It features a multitude of dials and instruments designed with the same stylings as these military planes. Some people, such as myself, will prefer the more conventional dashboards on the S, SS and SSR. It’s simply a matter of personal taste.

The Sunsation 36’s cabin is relatively welcoming for a high performance craft. Obviously you don’t get a lot of head room, but you do get some conveniences, such as a fridge and sink. The little enclosed bathroom is quite practical as it also has a sink. The big V-berth sleeps two adults, while the U-shaped seating allows passengers to enjoy a meal around the foldaway table. In a pinch, two extra passengers can also spend the night by converting the table and bench into a bed. Not only does this boat offer great performance, it’s also comfortable enough for a weekend aboard.

On the water
When you start the engine, you’ll appreciate Mercury Racing’s X-haust Noise Reducer, which was developed to meet European noise standards, but is also available on our side of the pond. The sound it produces is less invasive than other high performance boats. Since the exhaust is underwater, a richer sound comes out of just two small holes. This is an excellent solution, especially for people who dislike loud roaring sounds.

Push back the throttle, and the boat starts up instantly, without any cavitation. At 2,500 rpm, you reach 35 mph (56 km/hr) and fuel consumption hovers around 22 gallons per hour. This is the boat’s ideal cruising speed, as it offers the best speed-consumption ratio. According to the manufacturer, the boat’s top speed is 95.2 mph (153 km/hr) at 5,350 rpm. This would burn some 90 gallons per hour, which is clearly less economical. At cruising speed, however, fuel consumption is quite reasonable, especially considering that you have a pair of 525 V8s aboard.

Our short test drive gave us the chance to ascertain that this boat is very stable and capable of taking on good size waves without slowing down. This is definitely an advantage that this longer boat has over the 32-foot model. Despite the fact that there is no windshield, the small deflector does a good job of sending wind over your head. You’ll appreciate this when the mercury starts to drop.

When asked about Sunsation’s success despite the recession, Vice President Joe Schaldenbrand told us that clients appreciate the customizable options they offer, as well as the quality relationships between company directors and clients. In fact, it’s not unusual to see the directors respond to customer questions and comments on the manufacturer’s discussion forum.

As for the test model, it offered the best of all worlds. It was just big enough to be practical and offer excellent performances, yet small enough to be affordable and easy to transport.